16 hours ago 1 min read
By using our website, you agree to the use of our cookies.
Got it! 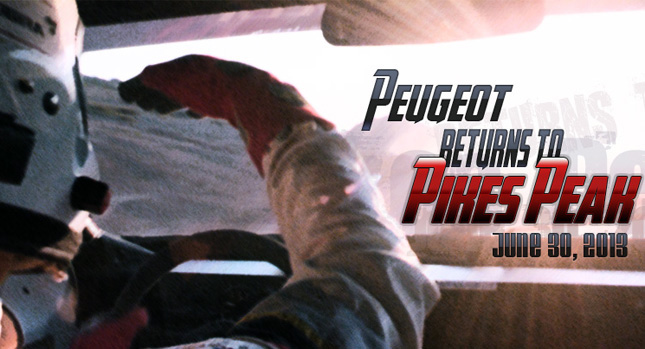 March 28, 2013 — It was exactly 100 years ago that Peugeot notched up its first racing victory, at Indianapolis, the first of a very long list of successes in some of motorsport’s most mythical events. Its previous Pikes Peak Hill Climb triumphs not only marked the world of international motorsport but have become an integral part of Peugeot’s DNA. Ari Vatanen’s unforgettable record-breaking victory on the 1988 event in the 405 T16 is documented by the celebrated film, ‘Climb Dance’. Peugeot won the famous hill climb a second time in 1989, this time with the USA’s Robby Unser behind the wheel.

The Pikes Peak Hill Climb’s unique course was finally entirely asphalted last year and comprises 156 turns over a distance of 20 kilometres that take competitors from an altitude of 2,800 metres to 4,300 metres at its highest point. The event is famous, too, as the USA’s second-oldest motorsport competition after Indianapolis and, over the decades, it has earned a reputation as a notoriously difficult and complex challenge!

The Peugeot 208 T16 Pikes Peak has been entered in the premier ‘Unlimited’ class and has been given the start number ‘208’. Its sole objective is victory!

World class partners
To maximise its chances of winning the Pikes Peak Hill Climb with the 208 T16 Pikes Peak, Peugeot has enlisted the support of the very best partners for this exceptional project, namely Total, Red Bull, Michelin and Sébastien Loeb. The nine-time world rally champion was able to accept Peugeot’s proposal thanks to Citroën which has authorised its star driver to contest the American event for the first time in his career.

As all the different players prepare for the challenge, all that remains is for the car that will be usedfor the ascension – the 208 T16 Pikes Peak – to be unveiled, and its strengths and secrets are scheduled to be revealed in the middle of April.

Peugeot, a Brand on the offensive
The strong sales enjoyed by the new 208 (300,000 units manufactured up to end-February 2013) and the presentation to the media of the 208 GTI version at this very moment are eloquent signs of Peugeot’s dynamism. But Peugeot’s commercial successes have traditionally been accompanied by success in motorsport, so the decision to take on the challenge of this extraordinary, mythical, exacting competition – which also helped to forge the Brand’s reputation in the late 1980s – was a perfectly natural one.

3 questions to Maxime Picat (Peugeot Brand CEO)
1/ Does this event mark Peugeot’s return to motorsport?
M.P.: Peugeot has never abandoned motorsport. To realise that, one only needs to look at the busy activity of our customer competition department and all the different competition versions of the 208 it has developed, namely the 208 T16, the 208 R2, the 208 Racing Cup and the 208 GTi Peugeot Sport. The latter will even take part in the Nürburgring 24 Hours as part of the 208 GTi Racing Experience operation which was run in parallel to the 208 GTi’s launch. Last year, when we announced the end of our endurance racing programme, we stated that Peugeot wasn’t closing the door to a future factory programme. Peugeot Sport consequently drew up a list of potential projects, and that list included Pikes Peak. This exceptional event fits perfectly with the Brand’s international growth drive and appeared to us to be an exciting and stimulating challenge.

2/ Why choose the Pikes Peak Hill Climb?
M.P.: Pikes Peak is a one-off outing which has the potential to generate extensive media coverage and which meets the constraints of the current context. It is a legendary race that has inspired all the Brand’s teams who have mobilised behind the project which targets outright victory. It is also a tough, exceptional challenge which leaves no room for error. In other words, it’s exactly the sort of challenge that Peugeot adores.

3/ Why have the involvements of Red Bull and Sébastien Loeb been enlisted for this event?
M.P.: Our objective is to win, so we needed to stack up as many cards as possible in our favour by joining forces with the very best partners for this unique project, namely Total, Red Bull, Michelin and Sébastien Loeb. Indeed, I would like to take this opportunity to thank Citroën for this one-off ‘loan’ of its exceptional champion. Citroën’s support is emblematic of the cohesion that reigns within the PSA Peugeot Citroën group.