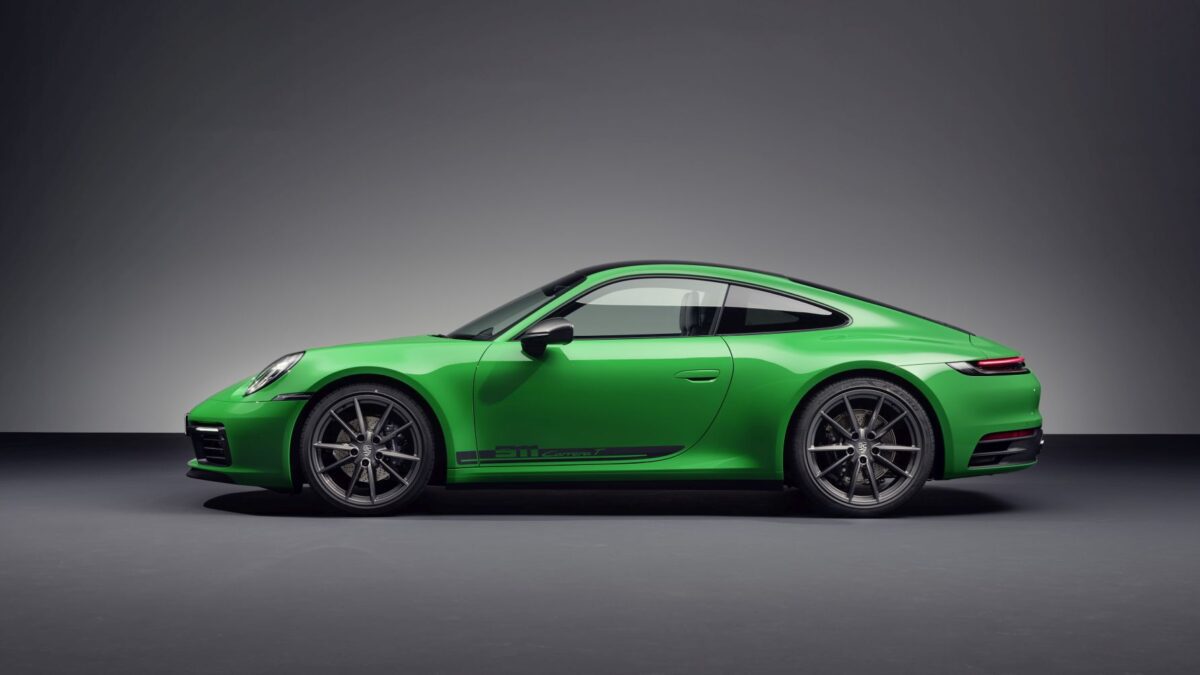 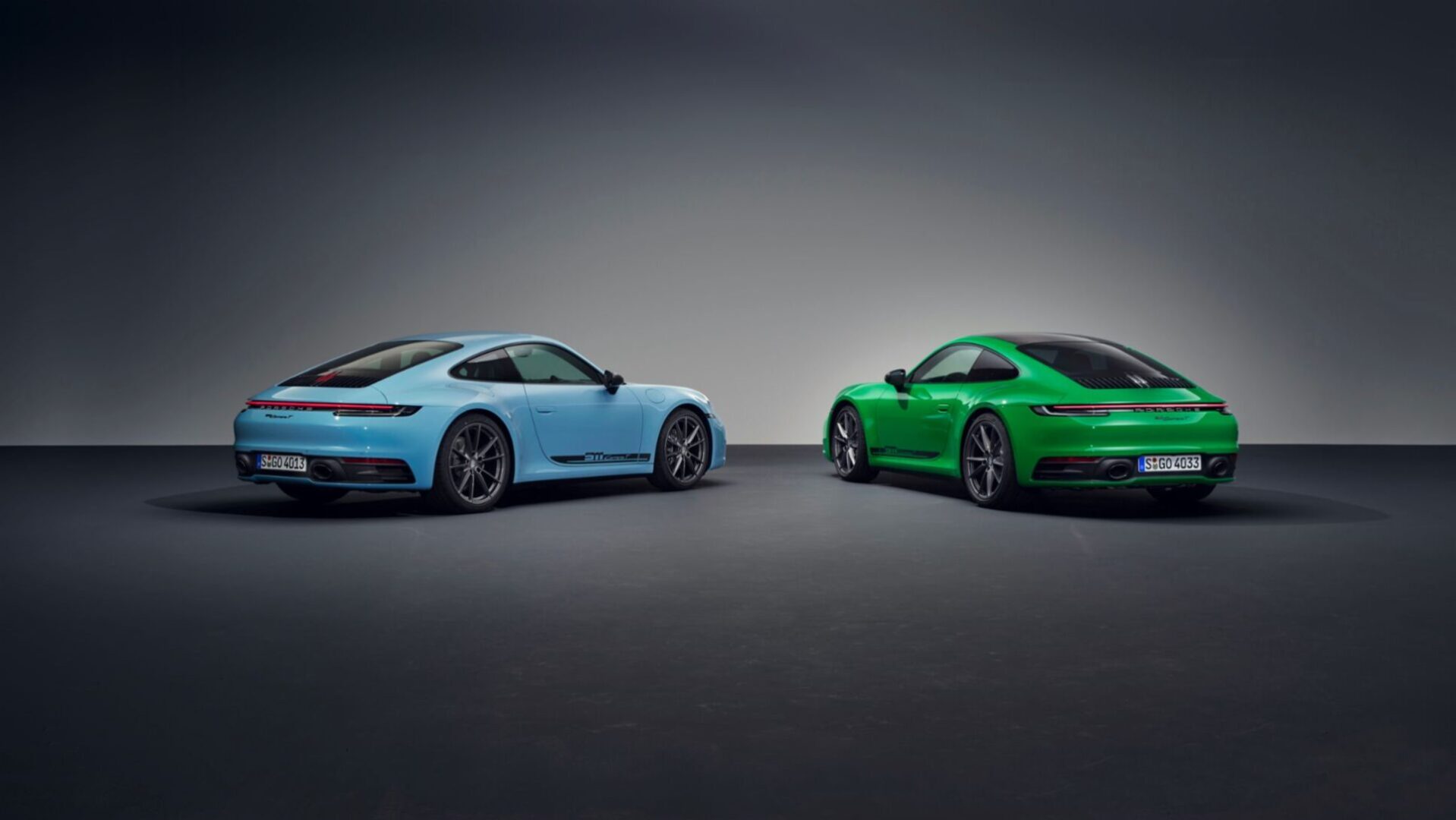 Πόσο: The Porsche 911 Carrera T will go out to dealers in February 2023 and can be ordered now. The price in Germany starts at € 123,845 including VAT and country-specific equipment.

Porsche is adding to the 911 family with the lightweight sports car, the 911 Carrera T. The letter “T” stands for touring and describes models that offer a purist driving experience with exceptionally sporty equipment.

The standard 911 T features a seven-speed manual gearbox. An eight-speed PDK is also available. The rear seats are omitted. Featuring a PASM sports suspension with 10-mm-lowering and reduced insulation, the new 911 Carrera T is the epitome of purism and exhilarating driving pleasure. You can feel it on winding mountain and country roads – and you can hear it too. The sound of the six-cylinder boxer engine is now an even more striking presence in the interior.
Standard with PASM sports suspension and Sport Chrono package

The 911 Carrera T also comes standard with the Sport Chrono package and the PASM sports suspension (-10 mm) – features that only the Carrera T offers in combination with the 385-PS engine. This is available as an option in the 911 Carrera S. On request, the Carrera T can also be ordered with the optional rear-axle steering, which is also normally reserved for models from the Carrera S and up.

T-specific equipment features include 20- and 21-inch Titanium Grey Carrera S wheels in front and back, respectively, with 245/35 (front) and 305/30 (rear) sized tyres. The 911 Carrera T also comes standard with the GT sports steering wheel, sports exhaust system and Sports Seats Plus (four-way, electric). Weighing just 1,470 kg, the 911 Carrera T with a manual transmission is the lightest series 911 with the entry-level engine, coming in 35 kg lighter than the 911 Carrera with a standard eight-speed PDK. In the 911 Carrera, the manual transmission is no longer available. Beyond the omitted back seats and reduced insulation, lightweight glass and a lightweight battery shave off even more weight

The “T” in the model designation of the Porsche 911 Carrera T stands for touring and traces its history back to the homologation of the 911 T as a touring car in 1968. This first 911 T was offered until 1973, and in 2017 Porsche revived the purist 911 variant with the 911 Carrera T of the 991 model line. Since then, the concept of the stripped-down, yet exceptionally sporty setup has been successfully brought to other model lines with the 718 Cayman T, the 718 Boxster T and the Macan T

On the exterior, the Porsche 911 Carrera T stands out from the rest of the model line with Dark Grey accentuating details. Contrasting elements such as the top and bottom trim on the exterior mirrors, the new door logos and the rear logos, and the trim strips on the rear lid grille feature Agate Grey. The windscreen also features a grey top tint. The tailpipes of the sports exhaust system are in high-gloss black. It all gives the new 911 Carrera T an even more extroverted and dynamic look. 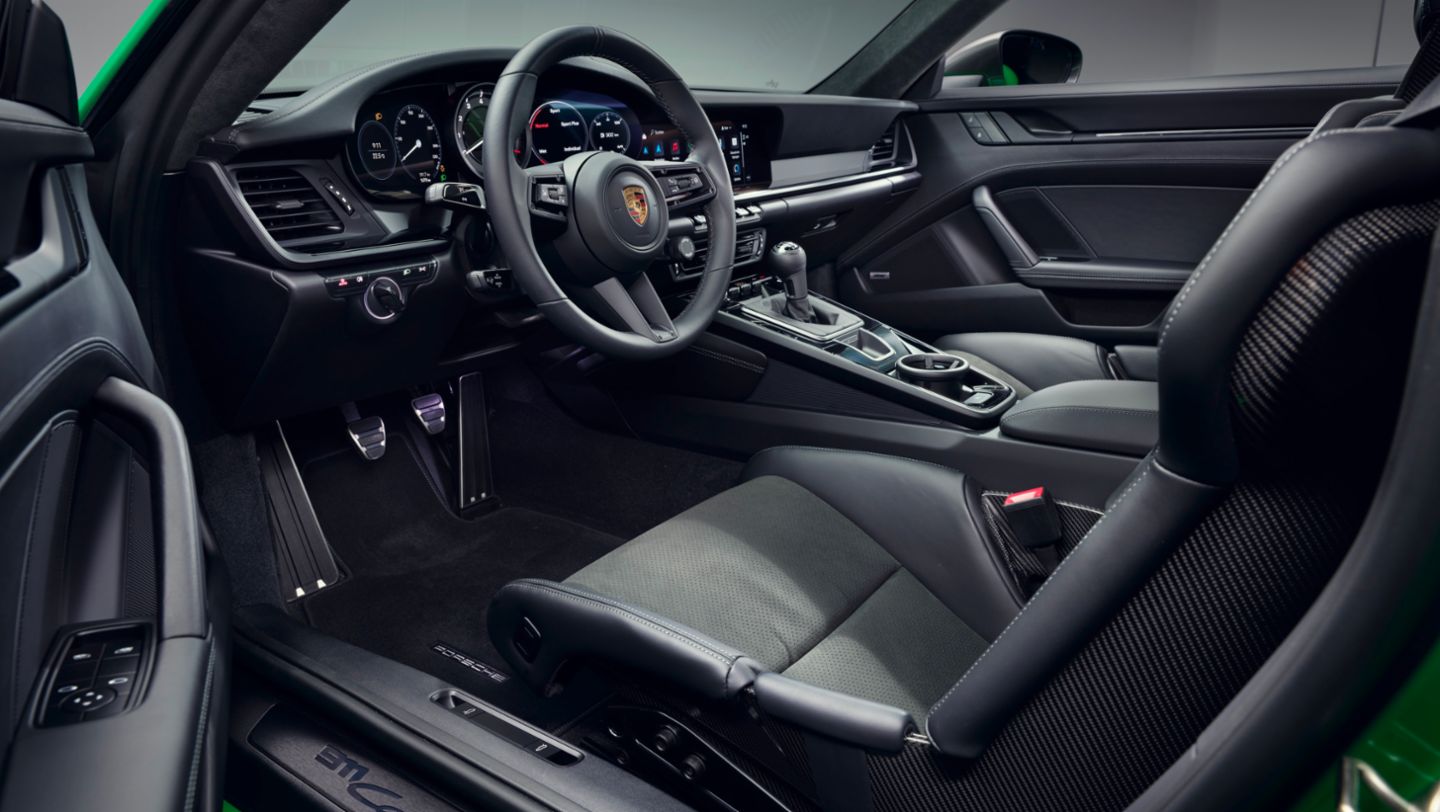 The car’s sportiness is underscored in the interior by the standard four-way Sports Seats Plus. Decorative trim in matte black and decorative inlays in high-gloss black round off the T interior. Customers seeking even more distinctiveness can choose the optional Carrera T interior package. In this case, they receive additional safety belts in the contrasting colours Slate Grey or Lizard Green.

The 911 Carrera T offers optional Adaptive Sports Seats Plus (18-way, electric) as well as the even sportier and exceptionally lightweight full bucket seats featuring Race Tex seat centres. The Carrera T interior package is offered with an optional extended leather interior. The armrests on the door panels and centre console are also in leather, along with the upper parts of the dashboard and door panel trim. 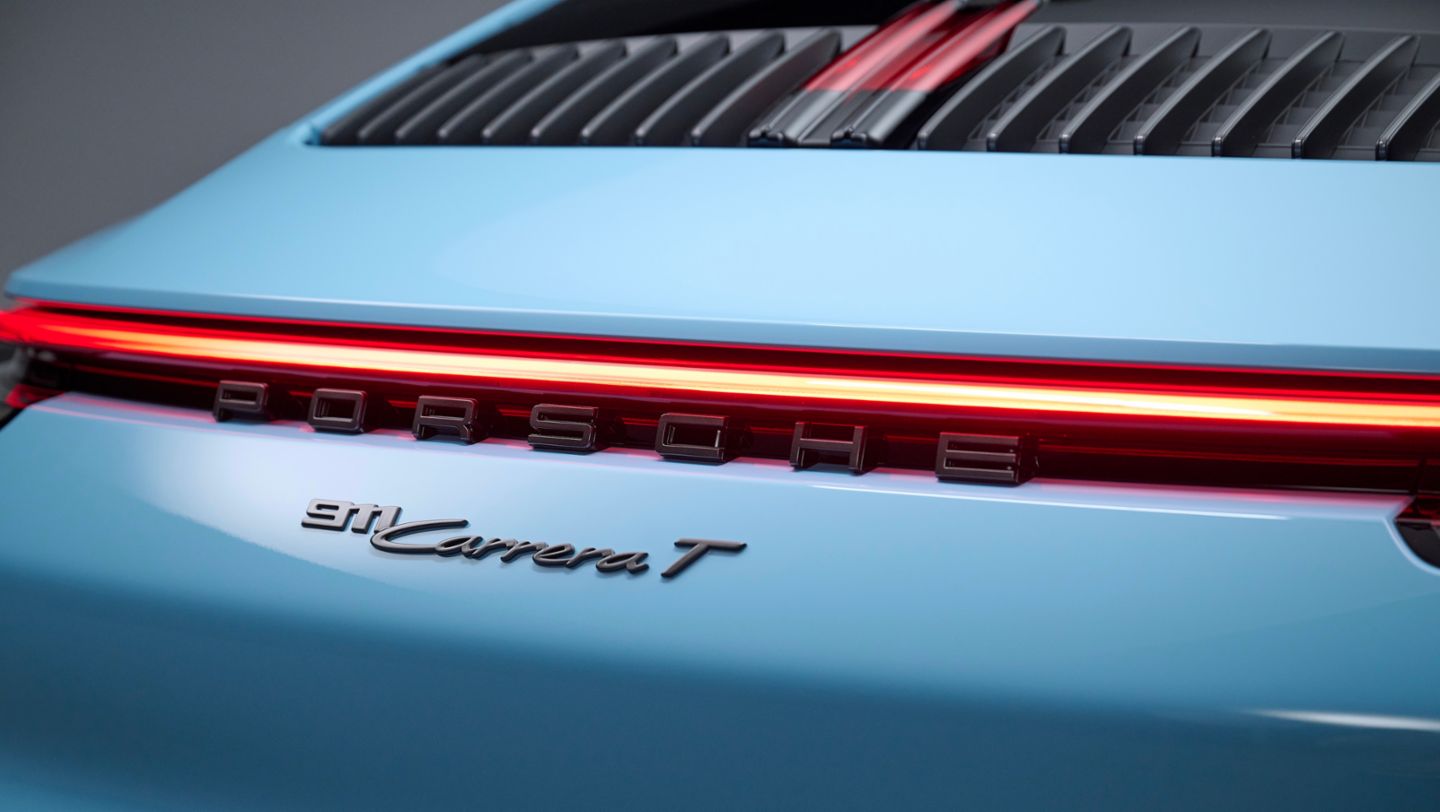 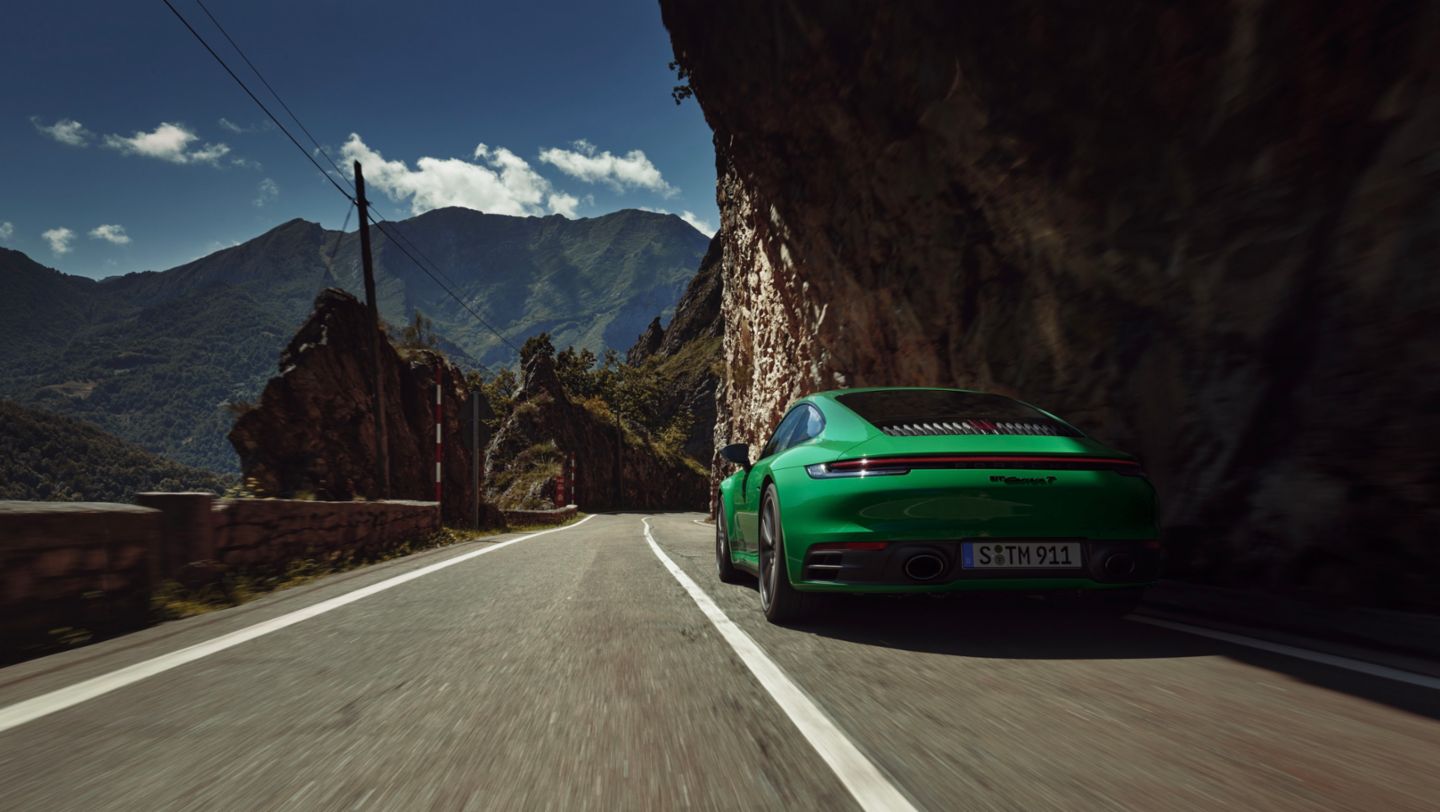