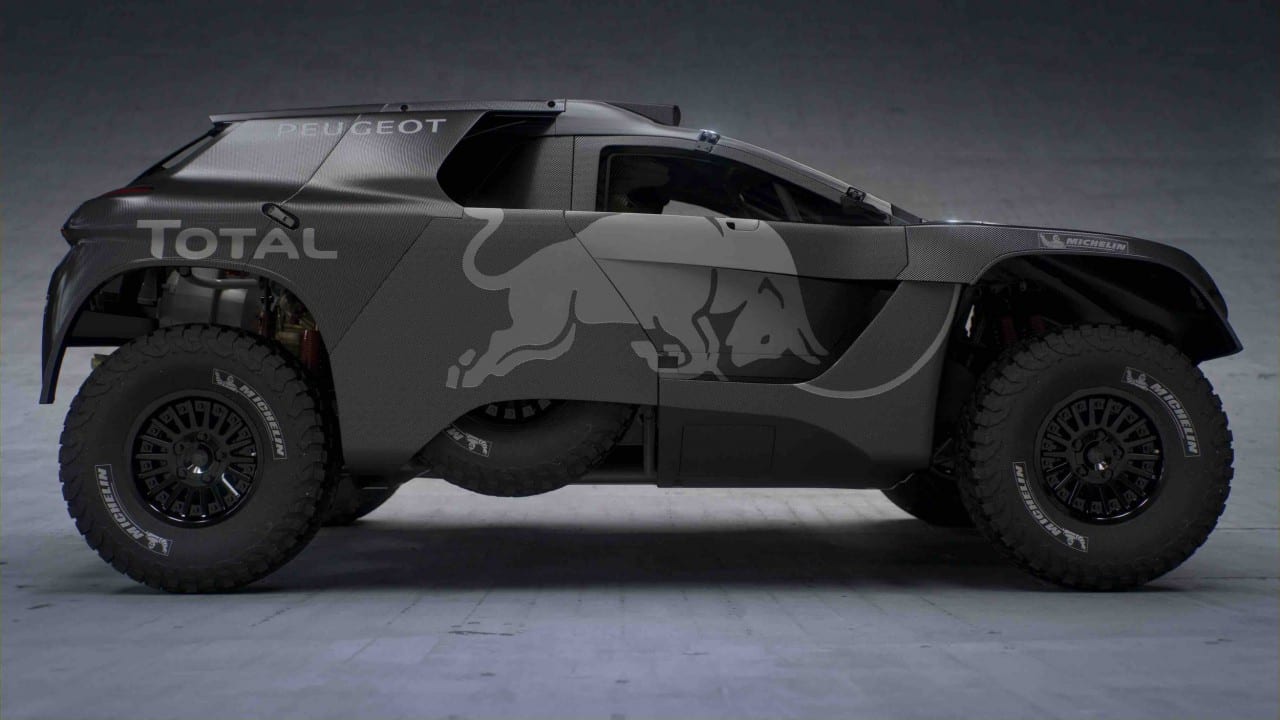 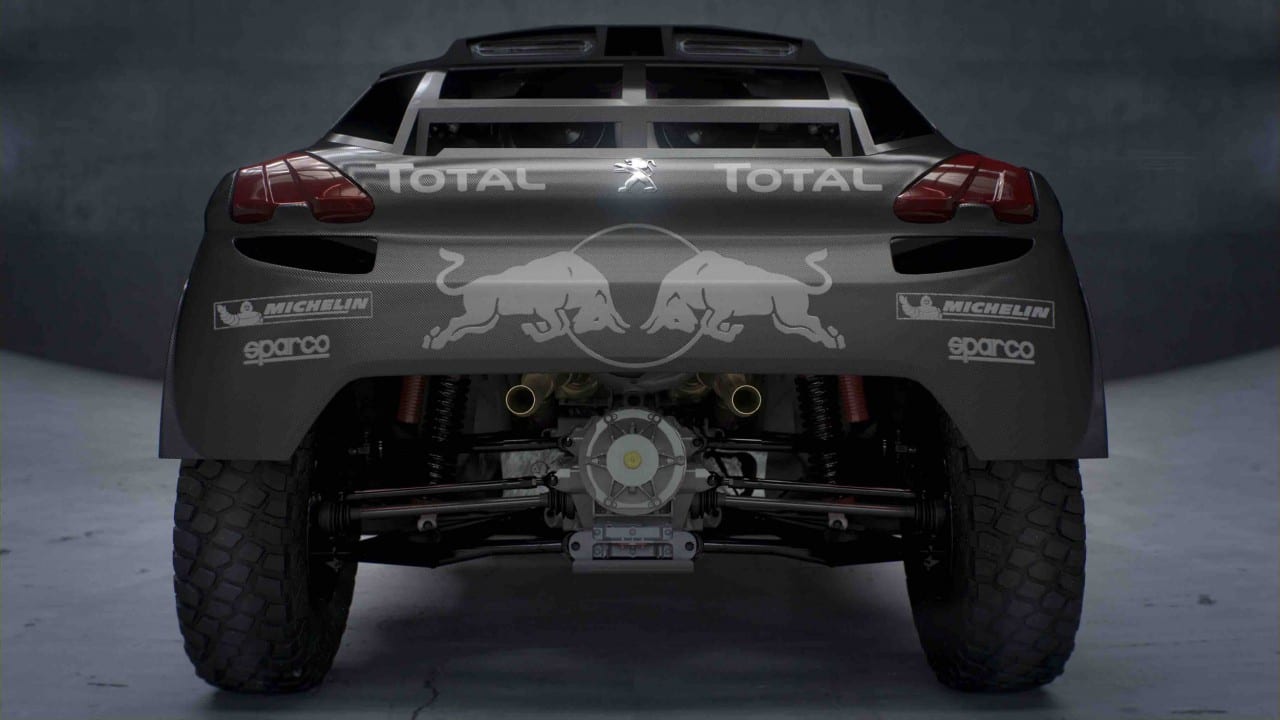 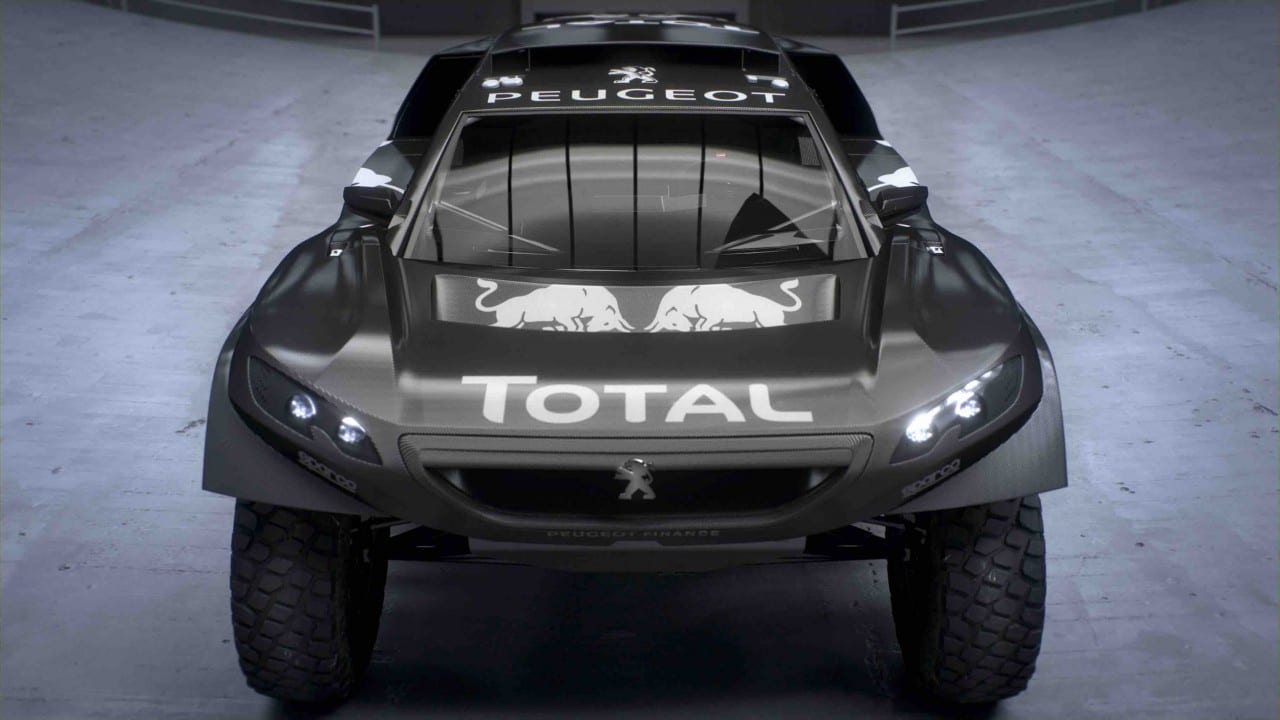 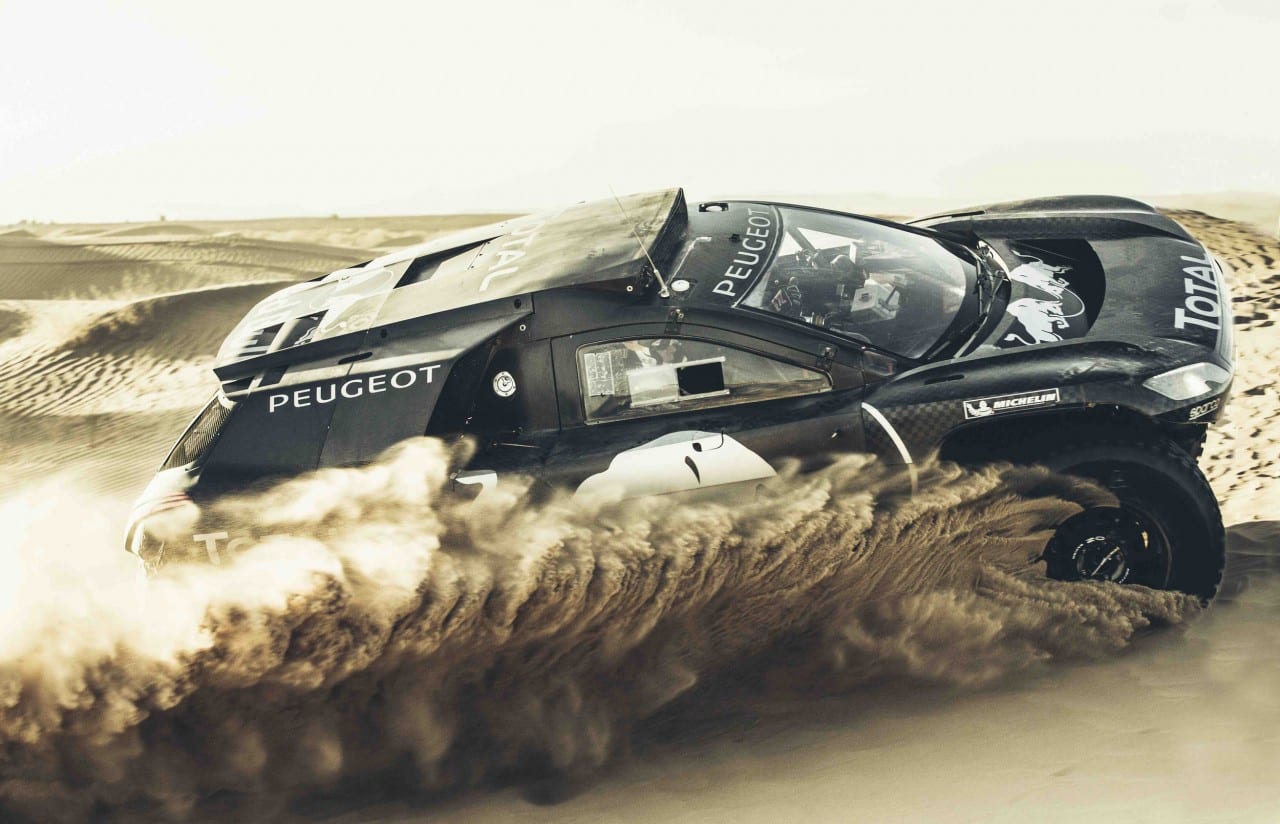 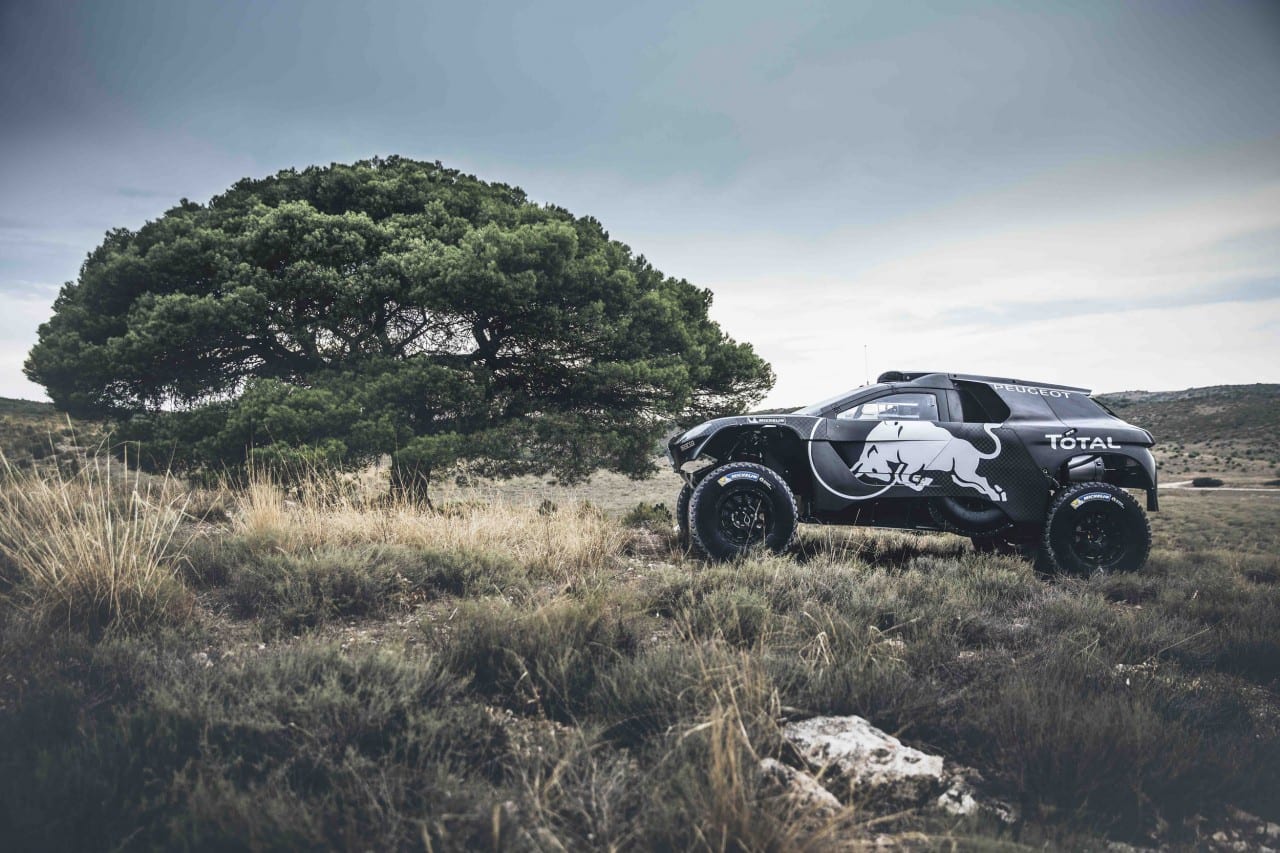 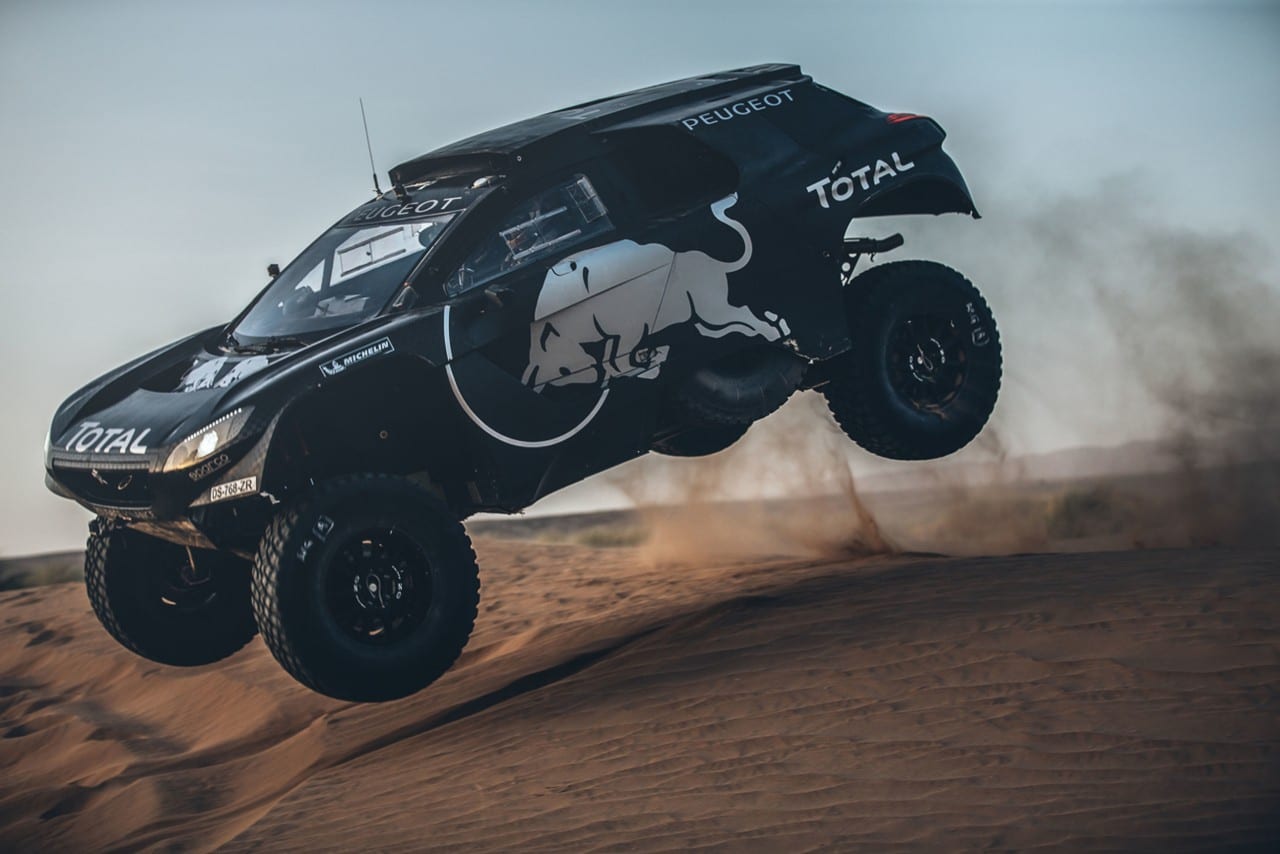 An updated version of the two-wheel drive beast that made its debut on the epic Dakar Rally in January has been revealed.

This latest evolution of the car, which is scheduled to make its competitive debut later in the year before heading to South America, is longer, wider, lower and more powerful than its predecessor: presenting a more aggressive stance, with a raft of improvements under the skin as well.

The front and rear overhangs have been reduced, enhancing the car’s go-anywhere ability. This is vital when it comes to tackling the varied obstacles such as sand dunes, river beds, and huge rocks that characterise the Dakar, making it one of the last true sporting adventures left on earth.

The PEUGEOT 2008DKR16 also benefits from improved aerodynamics: the bonnet and roof-mounted air-intake have been heavily revised, in order to provide more balanced downforce between front and rear. The new air scoop also ensures better airflow.

Other evolutions lie under its carbon skin. The suspension has been redesigned to deal more effectively with the different and rough terrains. It also benefits from better weight distribution, as well as magnesium one-piece wheels for the first time, matched to lighter tyres from Michelin. These replace the aluminium two-piece wheels from last year, with the combination resulting in a significant weight saving.

The new car has been a continual work in progress, with development work starting as soon as the original car crossed the finish ramp in Buenos Aires just over seven months ago, at the conclusion of this year’s Dakar.

Peugeot’s engineers went over their ‘Lion’ piece by piece, analysing what could be done better, with the help of its Dakar experts Stéphane Peterhansel (an 11-time winner), Carlos Sainz (a two-time world rally champion and also former Dakar winner) as well as Cyril Despres (a five-time Dakar winner on bikes).

These improvements were gradually applied and assessed through a series of tests, culminating in a one-two finish for Peterhansel and Despres on the recent China Silk Road Rally using an interim-specification car. This was essentially the 2015 model, with a number of development parts for 2016 added.

There are some surprises under the bonnet as well. Despite the air restrictor, the 3.0-litre V6 twin-turbo diesel engine now has more power. The driveability of the engine is increased too, which will be particularly useful during twisty stages.

Peugeot Sport Director Bruno Famin, overseeing the final test in Morocco to sign off the latest incarnation of Peugeot’s Dakar challenger, commented: “There isn’t one big change that we have made on our car: instead it has been a series of small evolutions in different areas, which together we hope will amount to an overall improvement. The areas we have concentrated on include bodywork and aerodynamics – as a result of which the car looks slightly different compared to last year – as well as engine and suspension, which is all under the skin. The tests we have carried out up to now, as well as our one-two finish in China recently, indicate that we are heading in the right direction. You really cannot compare our state of preparation now to how it was for our first Dakar this time last year, when everything was new to us! Of course you can never say that you are completely ready for the Dakar either because you simply never know what it will throw at you, but certainly this time we are more ready.”

Peterhansel and Sainz have driven the new car through the different phases of its development, and found it to be a useful step forward from its predecessor, providing greater driveability, power and traction.

Peterhansel, who gave the PEUGEOT 2008 DKR its first-ever overall win, in China, said: “You can really feel the difference now that the car is longer and wider, with a lower centre of gravity, because it’s a lot more stable so cornering speeds are faster. You can feel the difference in the engine as well: not only is it more powerful but also you can use all the power even at low revs. We’ve almost got a ‘problem’ now of how to manage all that power most effectively, but this is a very nice problem to have. We’re still not at the maximum of our capabilities, but testing has been very productive so far.”

Sainz stayed behind to concentrate on development work rather than competing in China. As a result, he has accumulated plenty of experience of the brand new challenger. The Spaniard added: “It’s been good testing and the car has been running really well. The potential of the car is much, much bigger than it was at this time last year and reliability has been solid too. We’ve changed quite a lot in the car in many key areas, so really we can call this one a completely new car compared to last year. I feel optimistic.”