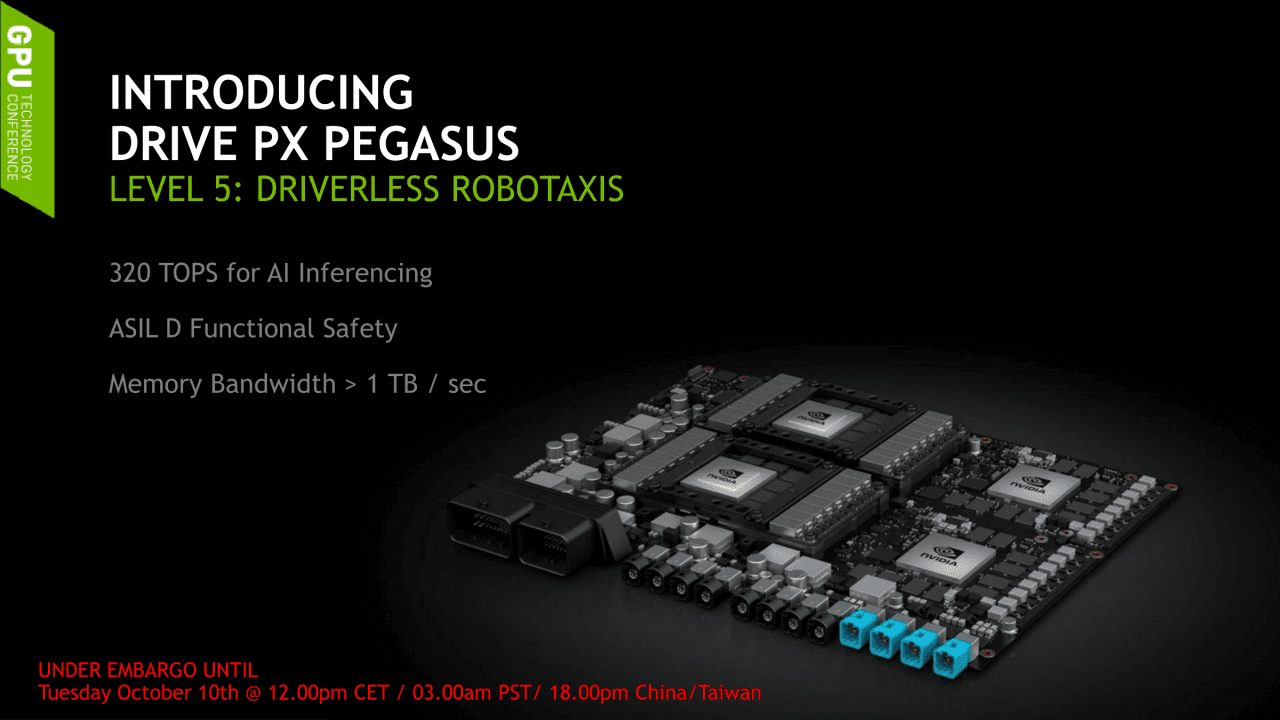 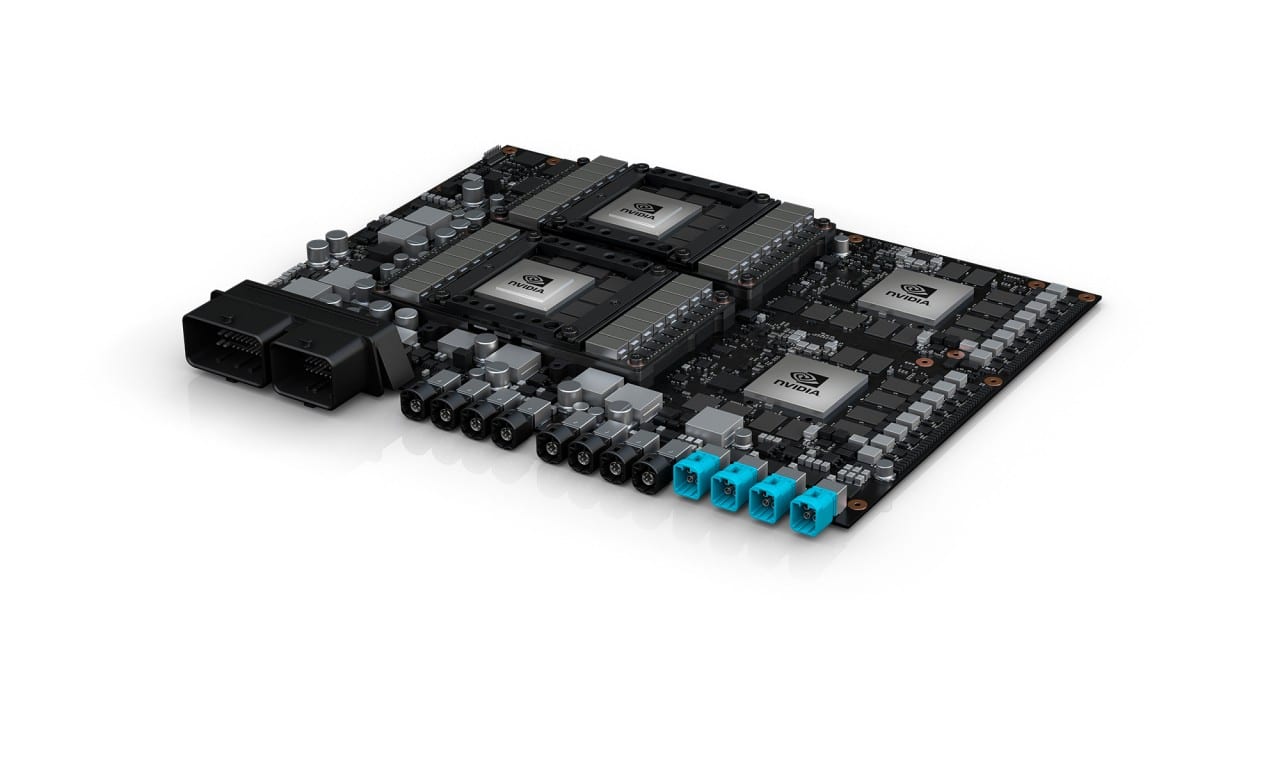 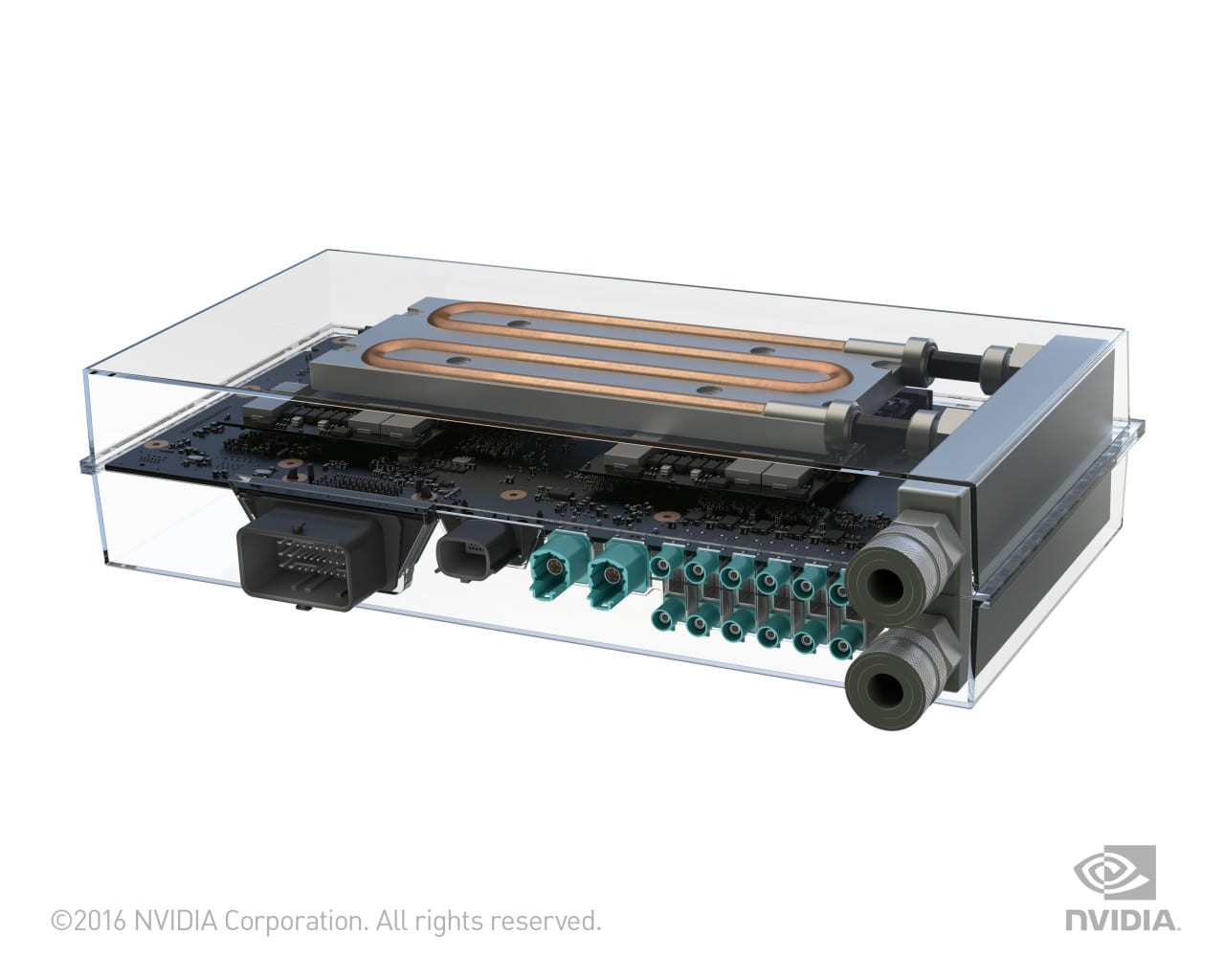 At GTC Europe 2017 in Germany, NVIDIA today has announced the Drive PX Pegasus, a new entry to the Drive PX family of computing modules for self-driving cars. Building off of the previous Drive PX family members, the Driver PX Pegasus is intended to be the next step in self-driving hardware by being the company’s first Level 5 system, meaning it’s capable of supporting fully automated driving for fully autonomous vehicles. Put succinctly, this is the holy grail of what NVIDIA has been building towards over the last few years.

The Drive PX Pegasus is very much a forward-looking product. While NVIDIA is announcing it today, they won’t even have dev kits available until later next year, and any kind of commercial release is farther off still. Consequently, the specifications for Drive PX Pegasus are equally forward looking: the board features two unannounced post-Volta next-generation discrete GPUs, which will be doing most of the heavy lifting. To put this in context, NVIDIA has only just started shipping Big Volta (GV100) for compute products, and smaller scale Volta GPUs are not expected until 2018, so we’re looking at something quite far into the future. Meanwhile, rounding out the package and serving as the hearts of the Pegasus will be a pair of NVIDIA’s upcoming Xavier SoCs, which combine an integrated Volta GPU (complete with tensor cores) with an unnamed octa-core ARM CPU design.

With the Drive PX Pegasus, NVIDIA is targeting commercial applications in robo-taxis and driverless long-haul. It will, in turn, coexist with the to-be-launched Drive PX Xavier, NVIDIA’s previously-announced small-scale self-driving hardware that essentially packs Drive PX 2’s capabilities into a small 30W board and features a single Xavier SoC. Drive PX Pegasus, by contrast, is essentially a next-generation Drive PX 2, utilizing much more powerful SoCs and GPUs than before.

NVIDIA has stated that Drive PX Pegasus will be air-cooled, although it’s likely to be right at the edge of what’s reasonable. WIth a 500W TDP, NVIDIA is pushing the envelope on performance in part by packing so much hardware into a single board. Not that a car will have any kind of trouble delivering that kind of power, of course, but it’s quite the interesting change in car design when we’re talking about significant amounts of power being dedicated to a non-mechanical operation.