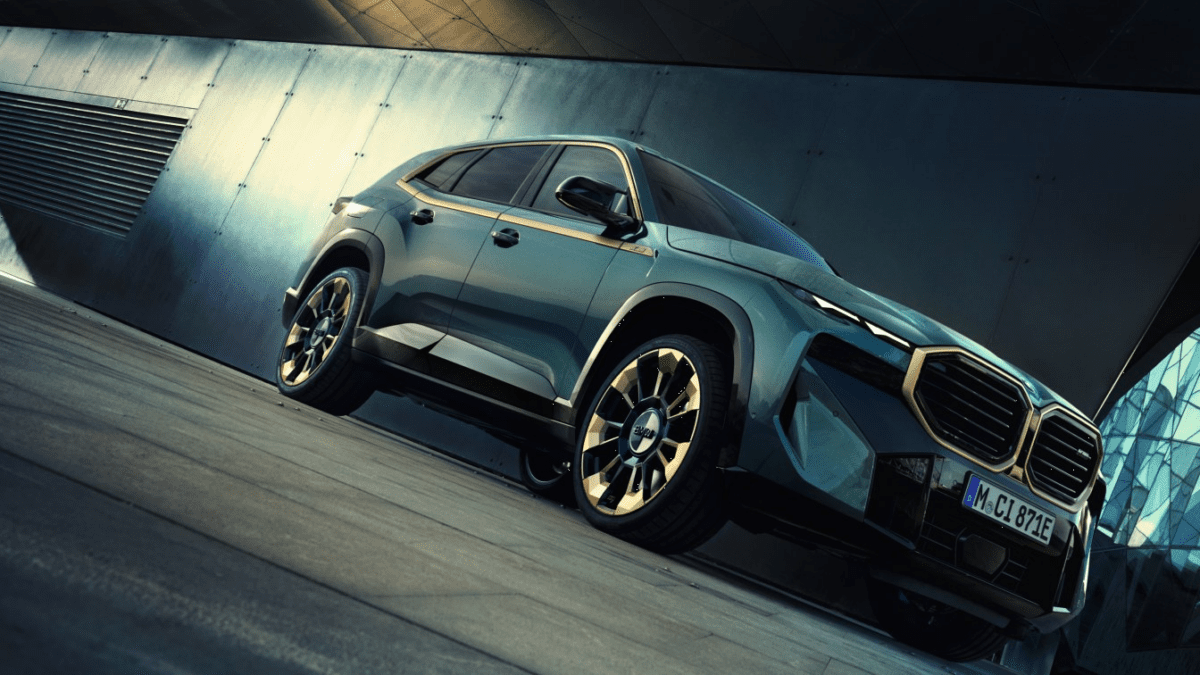 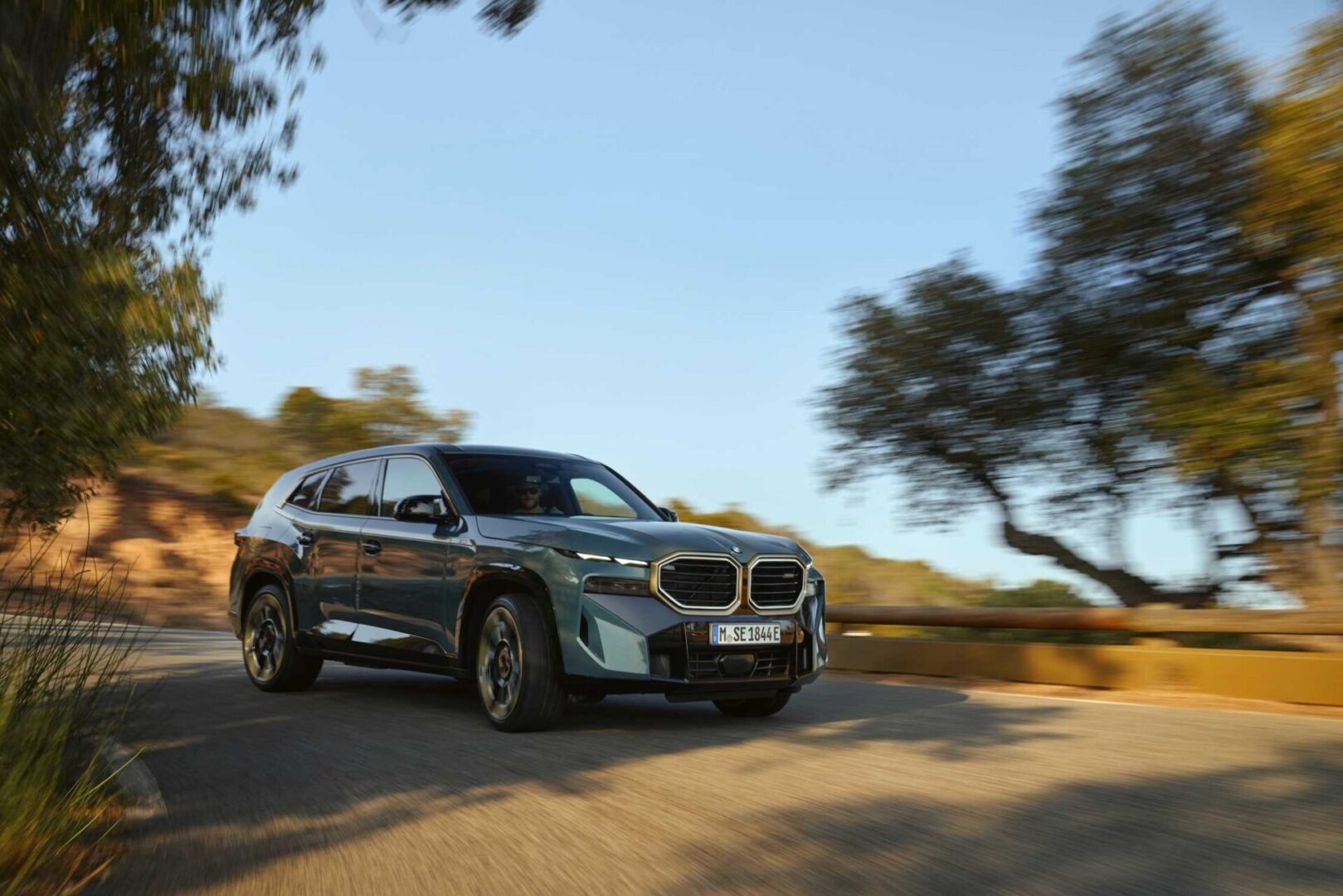 Richmond Hill, ON. As its 50th anniversary celebrations continue, BMW M GmbH unleashes high performance in a form never experienced before. Innovative drive system technology, a unique vehicle concept, a door opened into a whole new market segment and the ambition to attract new groups of customers – the first-ever BMW XM wraps all these elements in a confidently dramatic exterior design that exudes power and emotion and an interior that is at once intensely driver-focused, boldly modern, and indulgently sybaritic.

The all-new BMW XM is fitted with a newly developed plug-in hybrid drivetrain. The M HYBRID system in the BMW XM consists of a new 483-hp V8 engine with M TwinPower Turbo technology and a 194-hp electric motor integrated into the eight-speed M Steptronic transmission. Together, they generate a maximum system output of 644 hp at 5,400 RPM and 590 ft-lbs of torque between 1,600 and 5,000 RPM.

Power is channeled to the road via the M xDrive all-wheel-drive system. The combination of an electric motor and eight-cylinder engine produces immense, instantaneously available power sustained throughout the rev range. The M HYBRID system also enables purely electric driving with an anticipated range of up to 50 kilometres (estimated range according to preliminary BMW AG tests based on the EPA’s test procedure standards – NRCan figures to be confirmed at a later date).

The BMW XM shares its drive concept of an eight-cylinder combustion engine supported by an electric motor with the newly developed endurance racing car from BMW M Motorsport. The BMW M Hybrid V8 will go racing in the IMSA WeatherTech SportsCar Championship in North America in 2023 at venues including Daytona. The following season, it will power BMW M Motorsport’s return to the FIA World Endurance Championship (WEC) and the 24 Hours of Le Mans.

The extensively updated, 4.4-litre engine utilizes the thermodynamic benefits of a cross-bank exhaust manifold. A reinforced crankshaft drive, further developed turbocharging – mounted close to the exhaust manifold and with an electrically controlled blow-off valve – plus a new vane-type oil pump and a weight-minimized plastic oil sump all play a role in increasing the engine’s efficiency. An optimized oil separation process with variable impactor enhances the engine’s emissions performance.

The VALVETRONIC fully variable valve control now includes a switchable rocker arm on the exhaust side, which allows the engines exhaust valves to be shut entirely. This way, when the driver releases the accelerator, a higher proportion of the braking energy can be fed into the high-voltage battery by means of recuperation. 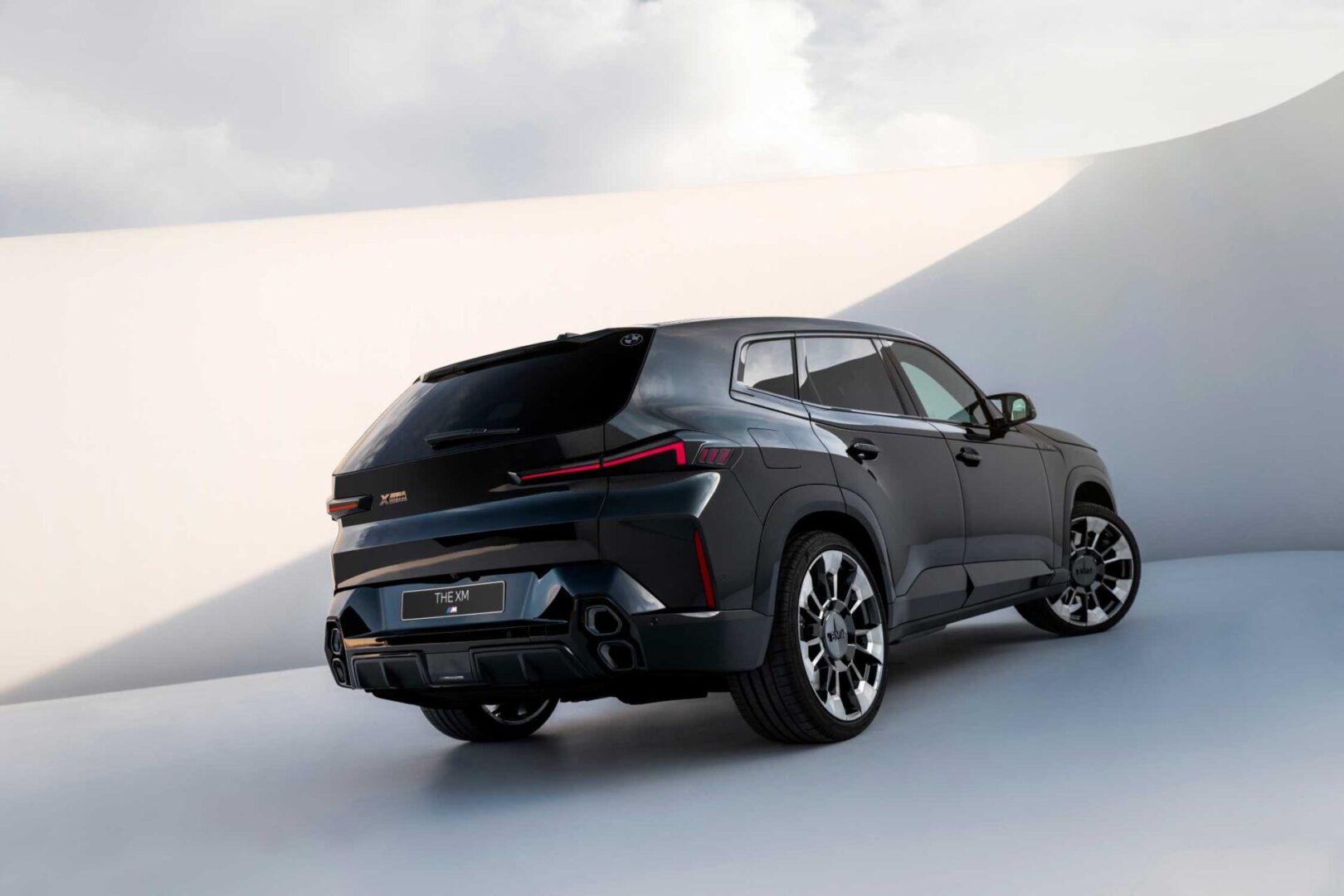 The V8 engine in the BMW XM is supported by an electric motor which, like the plug-in hybrid system’s power electronics and high-voltage battery, is a product of fifth-generation BMW eDrive technology. The permanently excited synchronous motor is integrated into the eight-speed M Steptronic transmission and helps to provide quick throttle response.

Aided by the grip of M xDrive and a sophisticated launch control system, the BMW XM accelerates from 0 to 100 km/h in just 4.3 seconds. Top speed is electronically limited to 250 km/h, or 270 km/h if the optional M Driver’s Package is specified. The top speed in pure electric mode is 140 km/h. 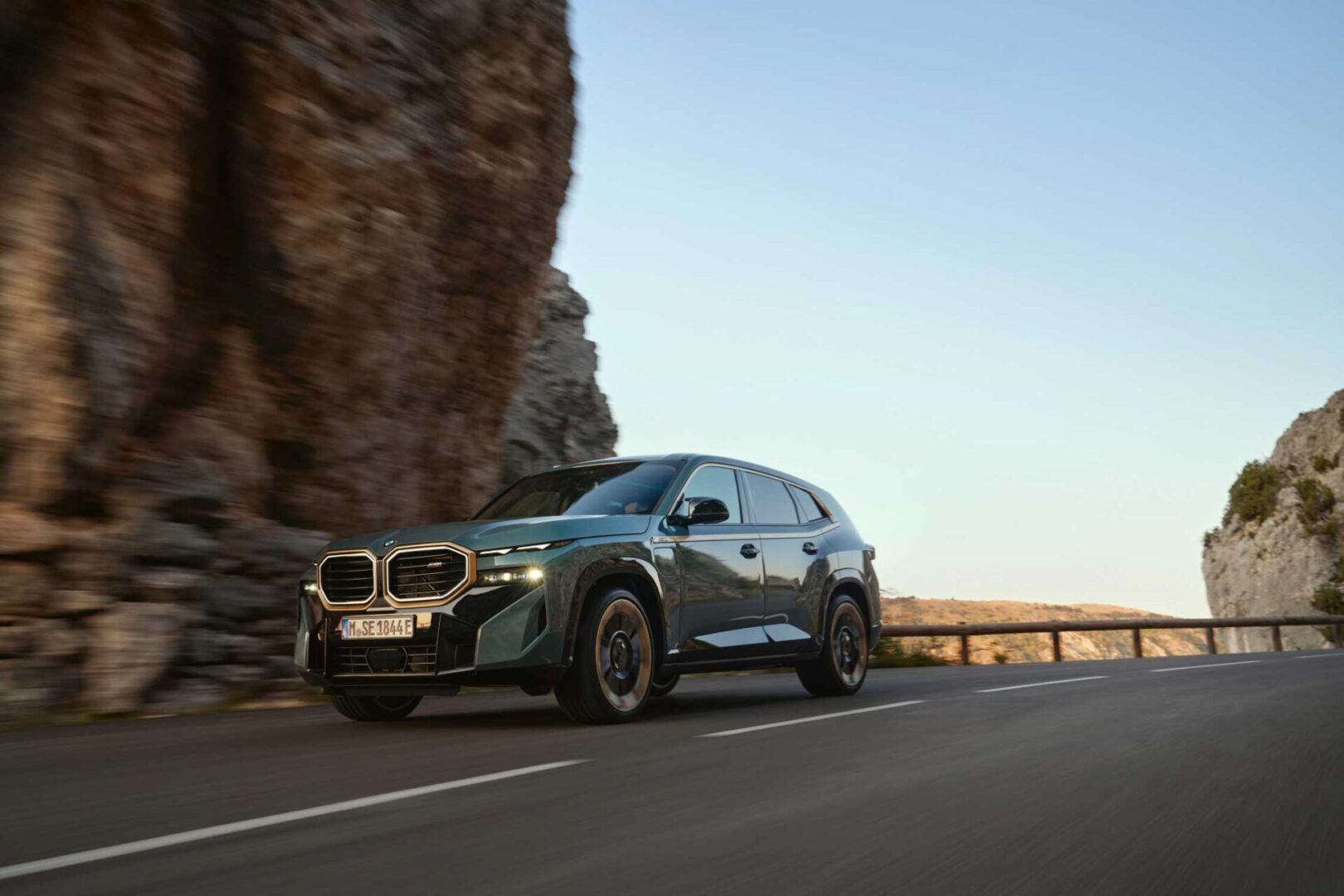 The coordination of the combustion engine and electric motor is handled by the M HYBRID system’s power electronics. Intelligent energy management allows the battery’s charge level to be regulated so that the final stretch of a longer journey through a built-up area can be covered using only electric power, for example.

The HV battery’s low installation height allows it to be mounted in the underbody of the BMW XM. The lithium-ion battery offers high energy density at a cell and battery pack level. It provides a constant flow of power across a wide temperature range and under the heavy loads of performance driving. It has a net usable energy content of 19.2 kWh (29.5 kWh gross). 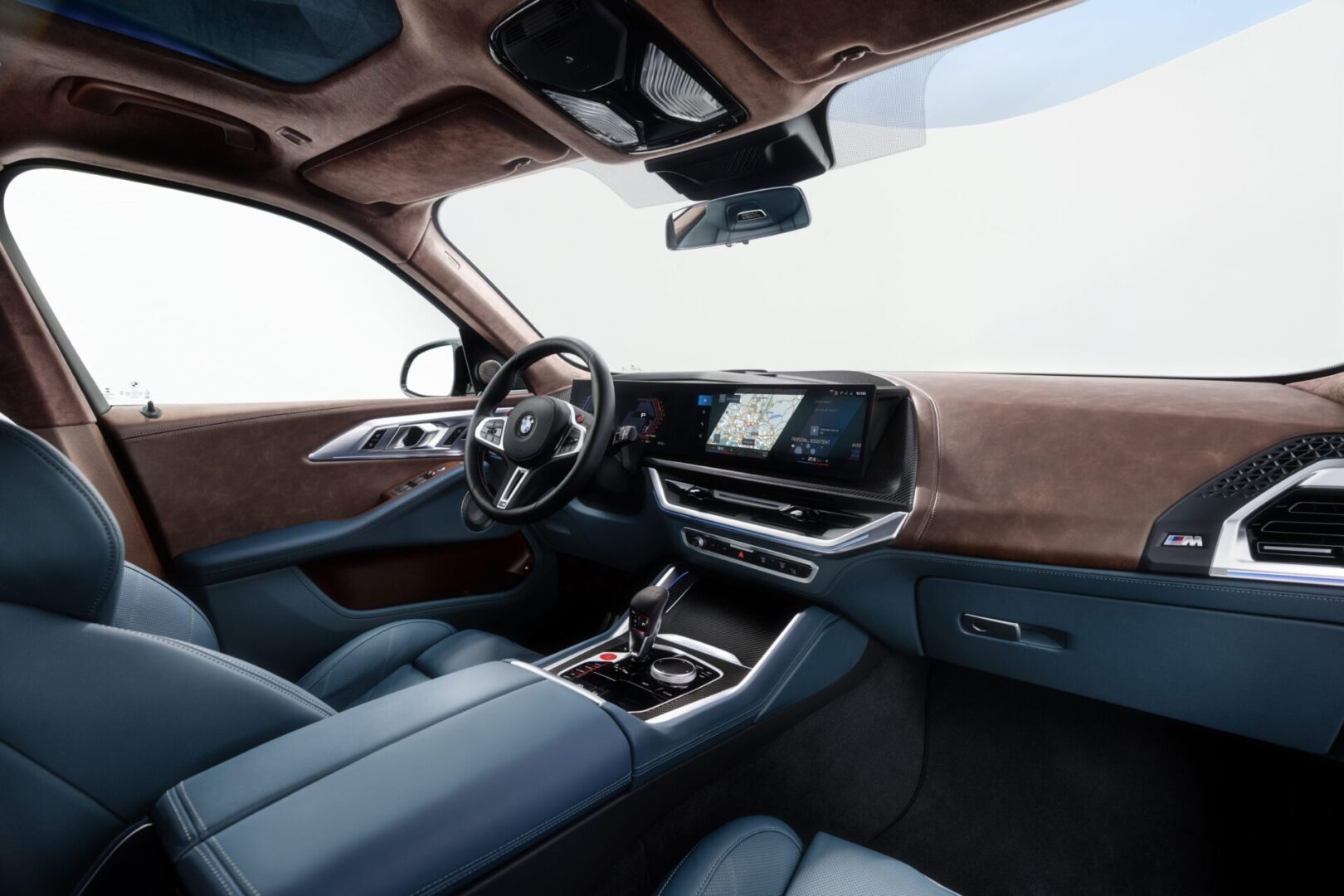 The Combined Charging Unit of the M HYBRID system enables AC charging at up to 7.4 kW. This means the high-voltage battery can be replenished from zero to 100 percent charge in 3.25 hours. The Combined Charging Unit also acts as a voltage transformer to supply the 12V electrical system. Predictive heat management reduces charging times by warming or cooling the battery as needed. The system uses data on the outside temperature, predicted charging power, charge stroke between the current actual value and the target value, the car’s remaining range and the distance to the destination to calculate the target temperature at which the high-voltage battery can be charged at maximum power for the longest possible time.

The M HYBRID drive system in the BMW XM has a cooling system tailored to its high-performance mission. Large air apertures at the front of the BMW XM, generously sized heat exchangers, and an integrated system for controlling the temperature of the combustion engine, the transmission (including the electric motor), and the high-voltage battery ensure ideal operating temperatures for the drive system technology in everyday driving situations and under sustained, high power demand. Transmission oil cooling is done by an upstream air heat exchanger. Water-carrying components have been flow-optimized to achieve maximum cooling power while keeping pumping rates low. All the heat exchangers are sealed against the surrounding structure using soft materials to enable optimal airflow. 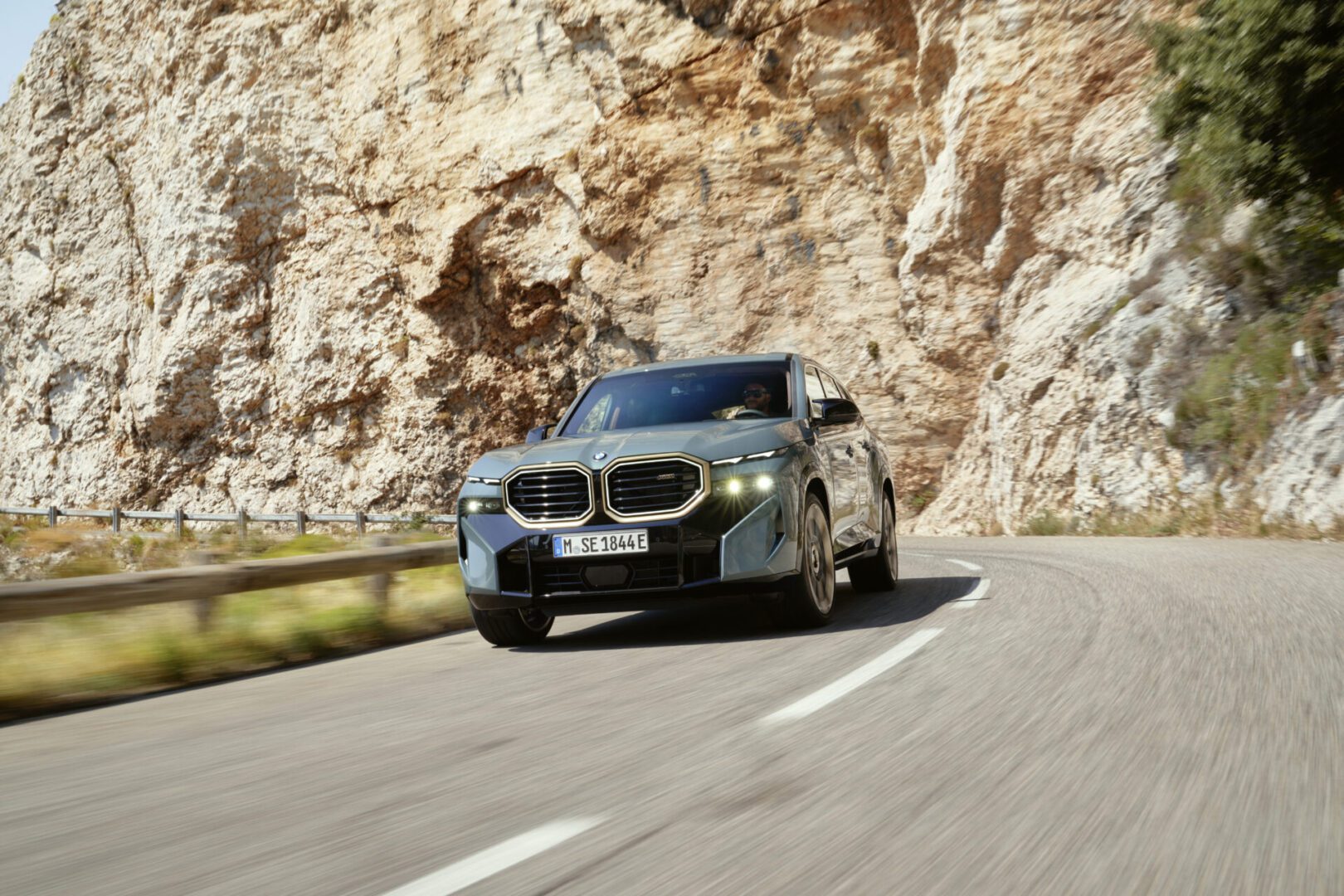 The 8-speed M Steptronic transmission with Drivelogic is also a first from BMW M. It channels not only the power generated by the combustion engine, but also the drive torque from the integrated electric motor as required to enhance either efficiency, comfort or power delivery. The hybrid module also acts as an integrated drive-off element and allows the car to creep at walking pace without the driver pressing the accelerator and firing the combustion engine.

A wet multi-plate separation clutch manages the smooth engagement and disengagement of the combustion engine during a journey. Its low drag torque allows the clutch to be open when driving in pure-electric mode. Furthermore, the separation clutch can eliminate torsional vibrations generated by the combustion engine using micro-slip control. In combination with the integrated torsional vibration damper system, this helps to ensure high levels of acoustic comfort at low revs.

The 8-speed M Steptronic transmission also has a Launch Control function to enable traction-optimized acceleration off the line with maximum thrust. The engine control unit governs both the release logic of the Launch Control system and the slip-optimized limitation of drive torque. The shift points are carefully calibrated help to ensure the best possible acceleration for all environmental conditions, e.g., outside temperature and road surface. 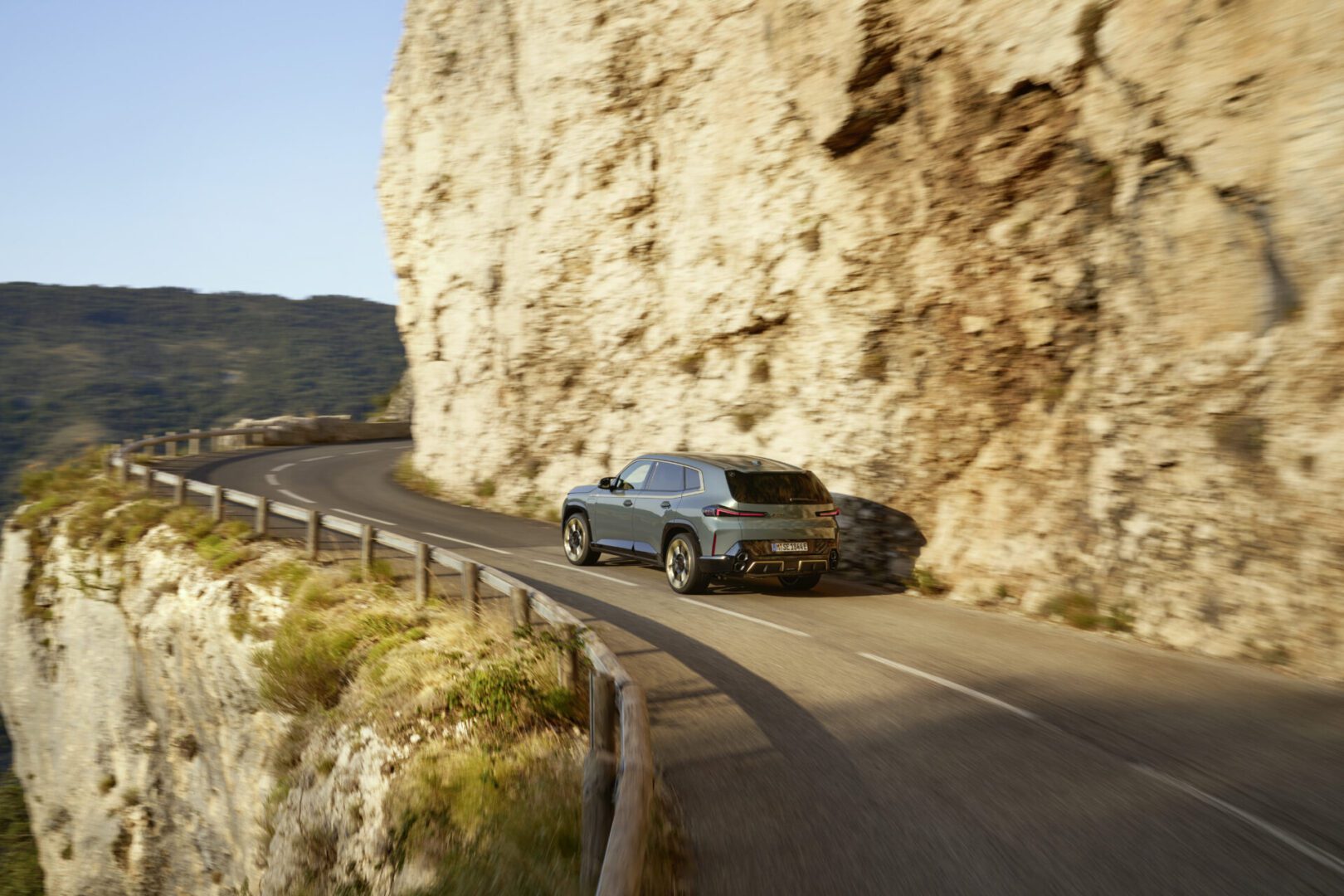 With its long wheelbase and wide tracks, the vehicle concept underpinning the BMW XM is well-suited to delivering a balanced blend of high performance and comfort. High degrees of wheel camber at the front and rear axle enhance the handling, as do the nearly 50/50 weight distribution and the very rigid body and chassis mountings. The positioning of the M HYBRID system’s high-voltage battery in the vehicle floor gives the BMW XM a low centre of gravity, which has a positive effect on its agility and cornering dynamics.

Its double-wishbone front axle boasts high levels of longitudinal and lateral rigidity, while the use of aluminum components reduces unsprung weight. The design includes a second level of control arms for wheel guidance, which means the dampers are almost completely isolated from lateral forces, improving damper response.

The five-link rear axle ensures precise wheel guidance and outstanding straight-line poise, together with impressive ride comfort thanks to its elastic mounting. The sheet-steel construction of its links helps to reduce weight, as do the aluminum wheel carriers and forged upper control arms. The rear-axle subframe made from aluminum offers high structural rigidity and features a large supporting base along with additional thrust arms. The camber arms with aerodynamically optimized paneling on their underside form an integral part of the completely sealed underbody, thereby helping to lower aerodynamic drag and substantially reduce rear axle lift.

The BMW XM is equipped with steel springs that have been designed to meet the requirements of a high-performance model’s handling dynamics and offer high levels of roll and vertical stabilization while also minimizing weight. Linear springs are fitted at the front axle and progressive springs at the rear. The progressive springs offer very long rebound travel combined with high oscillation rates, benefiting not only traction, but ride comfort for passengers in the rear. 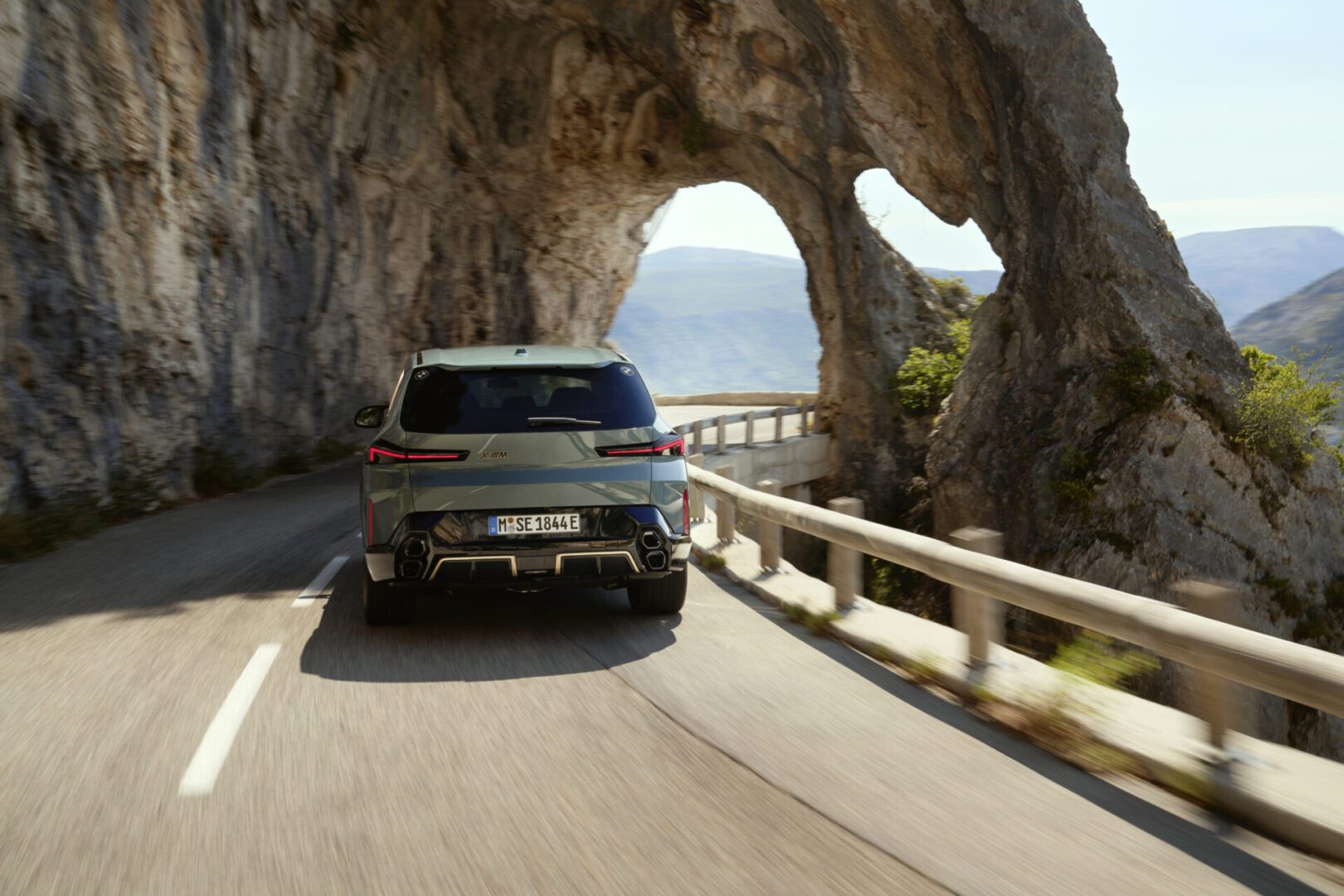 An important factor in the inspiring handling of the BMW XM is its active roll stabilization technology. The version of the electromechanical roll stabilization system found on the BMW XM uses a 48V electric motor as an active connection between the two halves of the anti-roll bar at both the front and rear axle. A dedicated 48V electrical system made up of supercapacitors supplies energy to the electric motors for the active anti-roll bars.

The active roll stabilization also increases comfort when driving in a straight line by decoupling the fixed connection of a conventional anti-roll bar between each axle’s wheels. This has the effect of correcting body roll when driving over surface imperfections on one side of the vehicle, also lessening the associated acceleration forces and the obtrusive ‘head-toss’ they can cause.

The Active Roll Comfort function goes further by enabling the system to actively suppress rolling movements caused by bumps in the road on one side of the vehicle rather than just reduce them. This allows any loss of ride comfort on rough roads to be minimized more effectively.

For the first time in a BMW M model, Integral Active Steering is fitted as standard equipment. Turning the rear wheels as well as the fronts makes light work of tight, low-speed maneuvers, increases agility at moderate speeds, and enhances poise and assurance at high speeds, especially when changing lanes. The rear wheels are turned in either the same or the opposite direction to the front wheels, depending on road speed. And in very challenging driving situations, stabilizing steering inputs at the rear wheels can help to keep the BMW XM safely on track.

The superb traction and precisely controllable handling of the BMW XM in any situation are enhanced by means of the very latest, intelligently interconnected control systems. The near-actuator wheel slip limitation maximizes directional stability even when driving in adverse road conditions. This traction control system is integrated into the engine management, eliminating the long signal paths to the DSC control unit. This allows corrective inputs to be applied up to ten times faster than in conventional systems and with exceptional precision. Because the near-actuator wheel slip limitation function manages any loss of traction, especially when accelerating hard or taking corners at speed, the DSC system has to intervene far less frequently to maintain composed and assured handling with selective applications of the brakes at individual wheels. 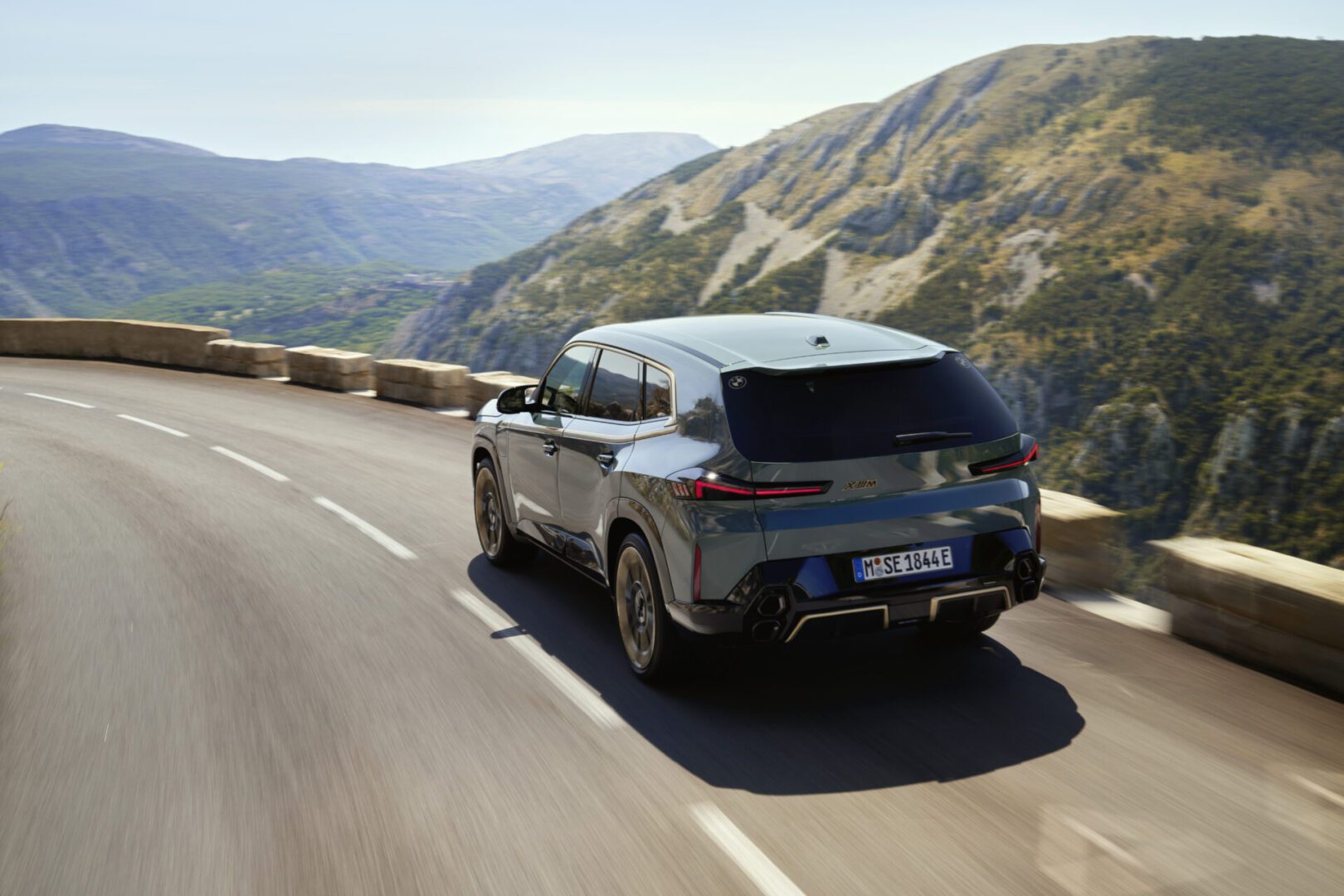